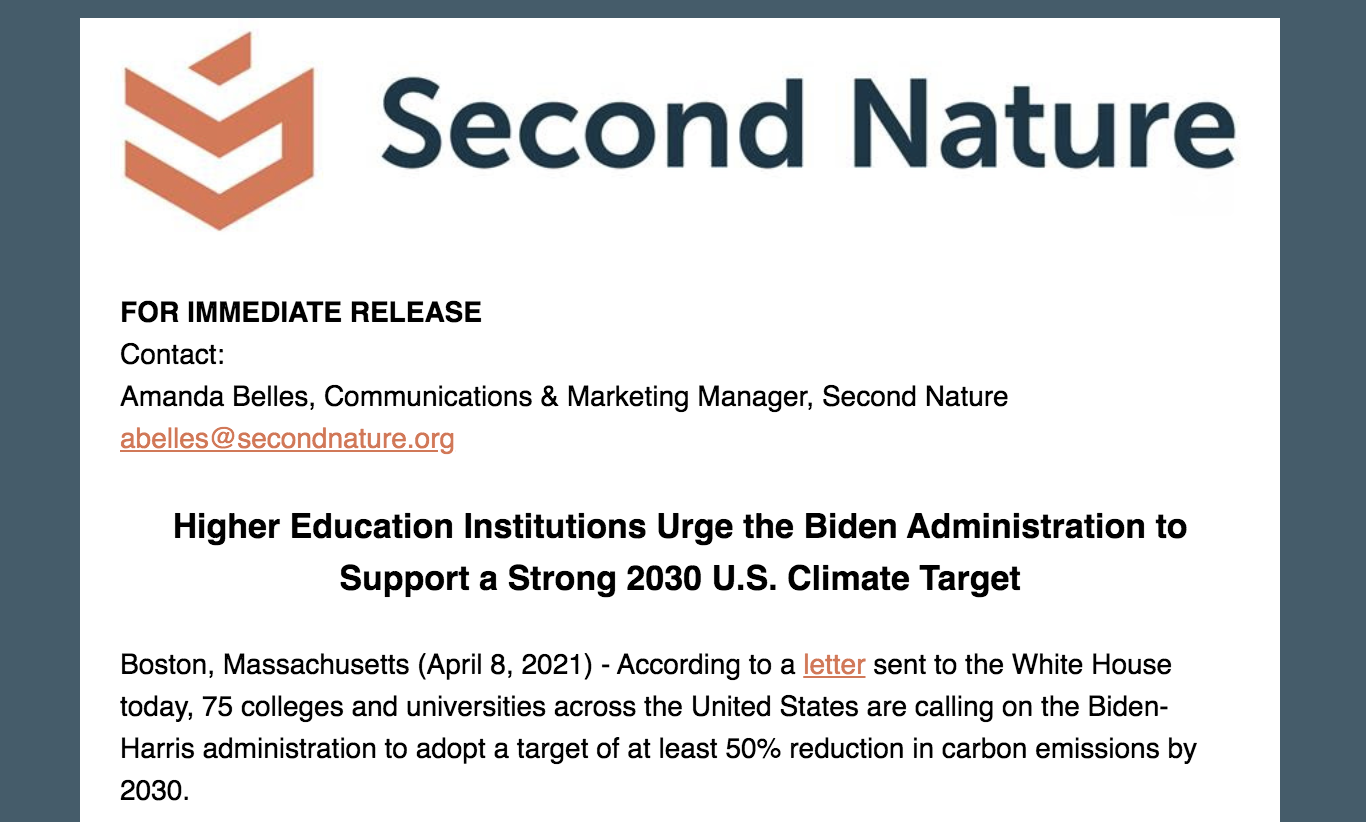 MassArt is pleased to be a part of this effort, and we have signed this letter to the President.

Boston, Massachusetts (April 8, 2021) – According to a letter sent to the White House today, 75 colleges and universities across the United States are calling on the Biden-Harris Administration to adopt a target of at least 50% reduction in carbon emissions by 2030.

“Universities across the country have committed to climate neutrality, and we are very proud of the campuses that have achieved this goal.  As we educate the next generation of leaders, we will lead by example, with innovation and resolve to showcase the opportunities of a carbon neutral economy, “ said Elsa Núñez, president of Eastern Connecticut State University.

“We applaud the Biden administration’s appointment of strong climate leaders across federal agencies and urge you to commit to bold greenhouse gas reductions by 2030 as we move collectively toward a carbon neutral future.”

“Climate change is one of the most pressing challenge[s] facing humankind, and I don’t believe it can be mitigated, let alone solved, without the collective action of our nation’s – and world’s –universities,” said Joseph E. Steinmetz, chancellor of the University of Arkansas. “The scale and complexity of the challenges involved, and the range of solutions required, will depend on the things that universities excel at: research and discovery, teaching and learning, outreach and engagement. It will take interdisciplinary collaboration, ingenuity, hard work, and creative problem solving, as well as the ability to communicate, educate and persuade the public that climate change is real. The earlier we accept and prioritize this goal, the better it will be for future generations.”

The letter also commends the Biden-Harris administration for their leadership on, and commitment to, detering climate change.

“We were delighted that President Biden chose Pittsburgh to launch his Build Back Better initiative, including the vital investments in green infrastructure,” said Chatham University President David Finegold.  “At Chatham, we’re committed to educating a new generation of leaders to follow in Rachel Carson’s footsteps to help us build a healthier and more sustainable future.”

The Biden-Harris administration re-entered the Paris Agreement in February, and needs to submit a carbon emission goal, known as a nationally determined contribution (NDC). The goal advocated for by these higher education institutions would help put the United States on a viable path to reach net-zero emissions by 2050.

“As a higher education institution, Truckee Meadows Community College (Reno, NV) is committed to contributing to a healthier world and positively impacting climate change,” said Truckee Meadows Community College president Karin Hilgersom.  “In recent years, we have made great progress toward our goal of campus carbon neutrality and reduction of greenhouse gas emissions.  We have ramped up campus infrastructure improvements and supported our student government association in advocacy for purchasing carbon credits locally. Equally vital to NDC’s are providing training programs that strengthen the renewable energy economy.  Through an innovative Advanced Manufacturing & Robotics program, TMCC has trained hundreds of employees for Tesla and Panasonic, among others, to support the job growth of the electric vehicle and lithium battery industry.”

“Between the climate leadership colleges and universities illustrate on a daily basis, and that of the Biden administration, the nation has an opportunity to make the crucial changes that it needs to make if we are going to actually make a difference when it comes to climate change,” stated Tim Carter, president of Second Nature.

This letter also emphasizes the crucial need to address climate change now, while there is still time for the United States to act.

Second Nature
Second Nature is committed to accelerating climate action in, and through, higher education. This is accomplished by mobilizing a diverse array of higher education institutions to act on bold climate commitments, to scale campus climate initiatives, and to create innovative climate solutions. Second Nature aims to align, amplify, and bridge the sector’s efforts with other global leaders to advance urgent climate priorities. Secondnature.org.